As the world’s population continues to grow at a record pace many natural resources are becoming unable to keep pace. Not only are energy sources becoming more difficult to produce, metals and other elements are increasingly in short supply due to the demands of an ever-larger consumer base

Nowhere is the problem more pronounced than if the availability of natural or sustainable foods, primarily those rich in protein and other healthful vitamin and minerals. For centuries humans have looked to the abundance of the seas for plentiful harvests of fish and other seafood. The earth’s population, however, has led to over-fishing and a sharp decline in the availability and density of seafood.

Even if population growth were to end and today’s numbers remain constant, the demand for food from the ocean would continue to deplete the oceans’ inventories of fish. With an estimated worldwide population of more than nine billion within the next three decades there is little chance of slowing the burgeoning growth. This has led entrepreneurs and sustainability proponents to devise new, more efficient methods of food production. 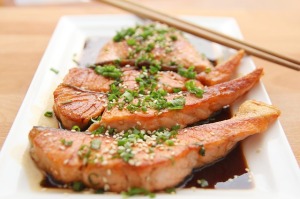 One of the best success stories in the quest for sustainable production of rich protein sources over the past 40 years is in the area of salmon farming. From a trial farm in the 1960’s the industry has grown to the point where over 60 percent of the salmon consumed worldwide is farmed. Wild salmon inventories have fallen to the point that each year fewer are caught. It is estimated that even though slightly over 2,500,000 metric tons of salmon are consumed annually, the demand will more than double by 2050. Wild inventories will continue to decline, requiring an even larger share to be produced by farming.

The Global Salmon Initiative seeks to unite salmon farmers worldwide in order to expand sustainable production to meet demand, and to do so in an environmentally benign manner. With a goal of reaching salmon sustainability while minimizing the environmental footprint, the organization is working toward more efficient methods, adding to the number of countries which produce farmed salmon and sharing information globally to achieve salmon sustainability. GSI salmon farming is an example of what can happen when corporate citizenship combines with social impact goals.